Witnessing the dedication of the Bantoanon/Asi New Testament with Genesis and Exodus, on 6 April 2017, was the best farewell present Heather Kilgour Crossley could have received, as her 35 years on the field came to a close.

The Bantoanon/Asi language is spoken by about 80,000 people, spread across four small islands in the Central Philippines.

‘After all these years of hard work, it was wonderful to see the joy and enthusiasm of pastors, priests and people of all ages finally holding in their hands the Bantoanon/Asi New Testament with Genesis and Exodus, in written, audio and digital form’, exclaimed Heather.

‘They are amazed at how beautiful and clear it is to understand.’

Certificates of appreciation were presented, at the dedication, to more than 80 people who helped make the translation possible, from officials to translation assistants, voice actors, singers and dictionary workers.

For the past few years, Heather has had the joy of partnering in the work with her husband, Stan Crossley. During the last two years, they revised all the translated books, prepared them for publication by adding introductions, maps, pictures and a glossary, and worked with a consultant on a final check. They had set May as a personal deadline, but finished early, with the Scriptures dedicated in the local town plaza on April 6, 2017.

‘I can hardly believe the work we’ve done,’ Heather commented on the final stages. ‘It was particularly detailed, but interesting, making sure significant words were used consistently throughout.’

She drew encouragement from 2 Timothy 3:16-17, which was read at the dedication. It highlights how Scripture is not only from God, but used by him to help believers lead obedient and faithful lives.

This verse helped when facing the challenge to ‘keep on going against the pull of the culture to devalue the Bantoanon/Asi mother tongue, in order to learn the national language (Tagalog) and English for education and employment.’ 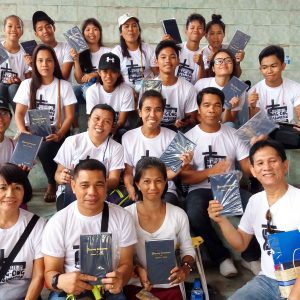 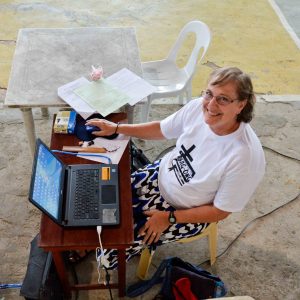 The couple’s faithful prayer and financial supporters also helped spur them on to the finish line, with several travelling to the Philippines for the dedication.

Stan and Heather also produced complementary resources: including a hymn book, Christmas carol CDs and DVDs, to help Bantoanon/Asi speakers engage with Scripture. Then they added another task to the ‘to do’ list: recording the Scriptures in Bantoanan/Asi, so people can access them via mobiles and audio-Bibles.

The recording was an intense process, ensuring every word was read with the right expression. ‘We were so encouraged that pastors and friends who helped dub the Jesus Film were willing to come again for 10 weeks, to record the whole New Testament, Genesis, Exodus and 180 hymns and choruses,’ Heather recounted.

Now aged 71 and 78, the couple juggled all this while making arrangements for their retirement: packing up their life in the Philippines and preparing for a new one in Canada. ‘There was lots to decide and do, but many people showed their love in giving us farewell meals,’ Heather said. “We were taken by surprise by the tears and sadness as it came time to say goodbye to close friends and employees, whom we’d known and loved for so many years.’ 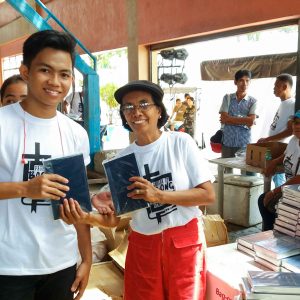 God willed that everything in the Sacred Writings would be written. And these have great usefulness for teaching, saying what is not true, correcting sin, and advising how to live correctly, in order that those who follow God would lack nothing and would be ready for all good works. (2 Timothy 3 : 16-17)

This story is from Wycliffe Today – July 2017 Edition (PDF)