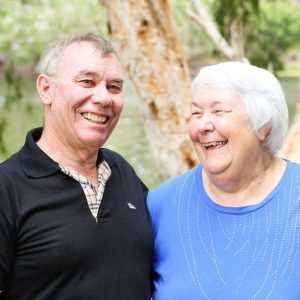 The Bwana-Bwana people were hungry for God’s Word in their language, as Alan and Faye Canavan discovered during their 30 years in the Milne Bay province of Papua New Guinea. When the New Testament was finalised, one of the local translators, Fred, had tears in his eyes when he held his own copy of the translated Scripture. Bibles in the Bwana-Bwana language were so popular that they sold out in the first couple of days following the dedication.

Yet engaging with younger generations in the Bwana-Bwana language was a challenge. To help younger people engage with God’s Word, Alan created a reading competition for those in grades five to eight. Within two short weeks, their reading skills ‘improved astronomically!’

The team also knew that there needed to be a new way to get teenagers and adults excited about Scripture in their heart language. Then an opportunity opened up to work with Faith Comes by Hearing to record Scripture in Bwana-Bwana and upload it to CDs, USBs and Micro SD cards that could be played on mobile phones. Alan shares:

After 30 years of work, a book of often around 1200 pages suddenly fitted into something the size of a fingernail … with room to spare! In a region where internet connection can be difficult to come by at times, having something that can easily be shared among friends has proven to be a great way to get the Bible into the hearts and minds of a new generation.

Alan and Faye are North Queensland representatives for Wycliffe Australia.