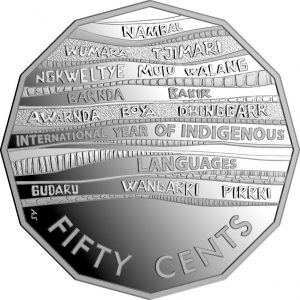 This year is the International Year of Indigenous Languages. To celebrate the occasion, the Royal Australian Mint has released a commemorative 50 cent coin.  The unique design incorporates translations for the word ‘coin’ from 14 of the many Indigenous languages in Australia.

The Australian Institute of Aboriginal and Torres Strait Islanders (AIATSIS) makes these points about language:

Language is more than just a means to communicate, it  . . . plays a central role in a sense of identity. Language also carries meaning beyond the words themselves, and is an important platform within which much cultural knowledge and heritage is passed on.

Speaking and learning traditional languages improves the wellbeing of Aboriginal and Torres Strait Islander peoples by providing a sense of belonging and empowerment.  Educational outcomes improve when children are taught in their first language, especially in the early years. Interpreting and translating, language teaching and learning, and producing resources in Indigenous Australian languages provide significant economic, social and intrinsic benefits to individuals and communities.*

This has been the experience of Wycliffe Bible Translators worldwide. Language goes deep to the core of who a person is, whether it be in the highlands of PNG, the jungles of South America or the deserts of Western Australia. Identity, meaning, culture, heritage, belonging, wellbeing and empowerment are all interconnected with indigenous languages. This is why languages matter and this is why we translate God’s Word into indigenous languages!

Looking for Scriptures in your language? Visit

Language ownership ‘fills up the soul’

Matjarra is an Aboriginal translator passionate about translating the New Testament into her clan’s own Yolngu language – Liyagawumirr. She wants Scripture available in her own language because it is not always appropriate to use another clan’s language, especially at sacred events like funerals. Matjarra shares why this project is so important:

English is not our first language. We have a lot of people who don’t know how to read the Bible or don’t understand it in an English context. When I became a Christian, I saw that need so I wanted to become a translator. This is for our new generation growing up, and for everyone in the community. We’re doing this Bible translating so they can read in our own language, so they can understand more about God.

Another Aboriginal translator was checking the book of Mark when she experienced firsthand the transformative effect of God speaking through his word in her own language:

Yesterday, we read those words of the Bible in my language, and they filled up my soul. I wasn’t even hungry for any food for the rest of the day!

I used to think that if the Bible was available in a language that someone understands, then they had access to God’s Word – but it’s not quite that simple. In the Yolngu area in Arnhem Land, for example, there is a network of related languages. Although they are not all mutually intelligible, most people can speak the largest language. However, that doesn’t mean it’s appropriate to use that language on all occasions. It’s not everyone’s language to use, it belongs to a particular clan. So even though the New Testament is available in the largest Yolngu language, that doesn’t mean everyone has full access to it.