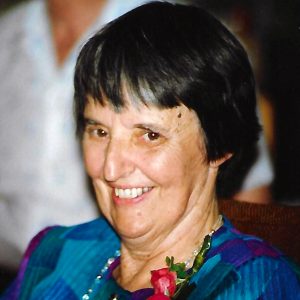 Gwen Gibson was a special colleague who served faithfully with Wycliffe and SIL for 45 years, working with the Kanite and Inoke languages in Papua New Guinea. Gwen committed her life to the Lord at the age of 16 and grew up in a home where God’s Word was highly valued: her father even represented the British and Foreign Bible Society.

Initially, while unsure of where the Lord would take her, Gwen worked as a bookkeeper and a housekeeper in a mission hospital in Vanuatu. She soon realised she would need further training if she was to be effective in the work to which she felt called.

When she returned to Australia, Gwen studied at the Melbourne Bible Institute before joining the Summer Institute of Linguistics. She was accepted for translation work and the Lord then called Gwen to team up with Joy McCartney to live in a remote village among the Kanite people of Papua New Guinea.

Gwen and Joy both recognised the loving way the Lord brought them from such different backgrounds to be on the same team. They were among four or five translators that helped unlock a major grammar ‘code’ in the verbal system of the Eastern Highlands of Papua New Guinea. This was a huge breakthrough for other translation teams working in the area.

Twenty-two years later, they celebrated the Kanite New Testament dedication. The next 12 years was devoted to translating the Inoke dialect—sufficiently different from Kanite that the people wanted the Word for themselves. Gwen also gave much of her time to teaching people to read and write as well as cooking, sewing, first aid and other life skills.

Gwen’s life here on earth is finished but her work lives on in the two language communities that now have Scripture and a growing interest in the gospel. Gwen was so pleased to know that the New Testament is now being recorded into audio format so people can listen to God’s Word in their own mother tongue.

What a great comfort and joy to know that this is not the end of Gwen’s story! ‘For [her] it is the beginning of the real story. All [her] life in this world … had only been the cover and title page.’ We have been inspired by the loving and gracious servant heart of Gwen Gibson.