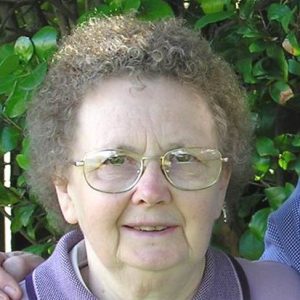 June served for nearly half a century with her husband Rob in Papua New Guinea 1962–2008. Together they translated the New Testament, and a small part of the Old Testament, into four dialects of the Kaugel language group. She and Rob continued editing Scripture in two of the dialects for Mega Voice audio players, and had annual short trips back to PNG after 2008.

Linguistic challenges included coming up with a translation of New Testament concepts such as ‘hope’. Other challenges included Rob’s manoeuvring their vehicle along treacherous cliff-edge roads; living in a tiny, cramped campervan for extended periods; health crises; and being attacked by machete-wielding and gun-toting ‘rascals’.

Born in Yarraville, an inner western suburb of Melbourne, June grew up in The Basin to Melbourne’s east, attending the local primary school, and later Box Hill Girls’ Technical School. She was evangelised by a godly Religious Education teacher, and was converted at the age of thirteen, as a result of a vivid outline of the gospel which came to her in a dream. At fourteen she left school to commence office work, and outside work hours she taught at The Basin Presbyterian Sunday School, ran Scripture Union beach missions, and attended Belgrave Heights conventions.

During the years 1958-60 June studied at Melbourne Bible Institute, and then at a 1961 SIL linguistic course, where she met Rob. It was not love at first sight, but it was love eventually, and in a whirlwind few months in 1962, they were engaged, then married, and then left for PNG to work with Wycliffe Bible Translators. She was sent out by St Hilary’s Anglican Church, Kew, in Victoria, and was always grateful for their faithful ongoing prayer and financial support.

June suffered from bouts of Chronic Fatigue Syndrome in PNG, but devoted the times when she was incapacitated-and the rest of her life-to an organised, disciplined and globally ranging prayer ministry. She displayed her gift for multi-skilling by simultaneously running a home, working on translation projects, and homeschooling their two children when away from Ukarumpa.

Later, Peter and Nola rewarded their mum by presenting her (and their dad) with eight grandchildren!

June died on 23 November 2013, from secondary complications, just over two years from being diagnosed with oesophageal cancer.