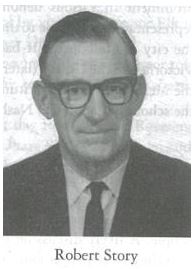 How do good ideas take shape? In the case of Wycliffe Australia’s very early history, it began with Robert Story reading a note in a Moody Monthly magazine:

‘If only I had had this training to help me with learning Portuguese when I was in Brazil!’ thought Robert.

This thought was quickly replaced with his responsibilities as secretary for Unevangelized Fields Mission (now Pioneers). ‘We have these young people planning to go to Papua and they are desperately looking for language training but where can we get this in Australia?,’ he wondered.

And as the idea grew, ‘Maybe Wycliffe Bible Translators in America could be attracted to Australia to teach this Summer Institute of Linguistics course?’

So Robert presented this audacious idea to the Interdenominational Missionary Fellowship (IMF) of Victoria, composed of well-known successful Christian businessmen and home-based personnel of missionary societies. They were astounded to know that Wycliffe Bible Translators in America were able to translate languages of illiterate people.

After a lively discussion, they decided to send two letters, one to the Summer Institute Linguistics (SIL) in America, and the other to the London School of Oriental Languages. London never answered, but SIL did.

The letter that Robert Story and IMF sent was dated 10 January 1947. Three years later, on 9 January 1950, the very first ‘Wycliffe School of Linguistics’ started at 9 am at the former Anglican Boys’ Grammar School at Berwick, Victoria.

All because of a note in a magazine, a man of vision, and team who dared to take the risk.