Working in translation is a remarkable, satisfying, challenging job that I love. It’s serious and life-changing work but sometimes the process provides some funny moments.

Sometimes the right word is just so hard to find. We were working through the minor prophets and every time the translator came to a word describing a kind of weapon, he made an action. In the end, exasperated, I said I simply can’t put that into the translation. I needed a word! After that, whenever we came to that word (especially when we got tired) we both did the action, laughing!

Another time, I was checking the translated version of Amos about a battle in Israel. In the middle of the narrative, some fighting men appeared on a ship, which was curious since the battle was on land. I looked at some different source texts and discovered the source of the problem: it mentioned ‘fleet-footed soldiers’ (Amos 2:15), and you know where the dictionary would direct someone with the word ‘fleet’, right?

I found a passage in 1 Kings 13 highly amusing – right before we changed it – when an old prophet called his sons to ‘saddle the donkey’ which came to be ‘put the boots on the donkey’. It now reads ‘get the donkey ready’ which is less interesting but closer to the idea, if you have no word for ‘saddle’ and no idea what it’s for.

But God has made everything beautiful at its own time. Ecc 3:11a

PRAY: Please pray for those working in translation, that the results of their work will well reflect the message spoken by the original writers as they were ‘moved by the Holy Spirit’ (2 Peter 1:21).

About the Author: Debbie Conwell, Translation Mentor in Solomon Islands. 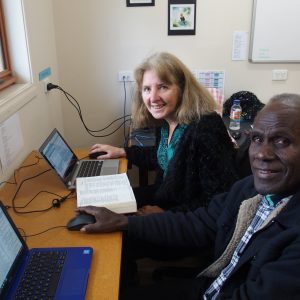