Give us your fuel, Lord!

Imagine being separated from your family at the height of a natural disaster. Landslides have cut off access to major roads. There is no transport, electricity, food or clean water. What would you do?

For Budy, the decision was simple: pray to God and trust that he would provide, just as he had seen him do as a translation facilitator working in a remote location.

After he graduated from Bible college, Budy lived in a remote village as part of his mission training. He joined Kartidaya (a Wycliffe Global Alliance partner), married and started a family. Then in September 2018, Budy was faced with one of the biggest challenges of his ministry. While he was working in a village 85 kilometres from his home recording the Jesus Film, a massive 7.5 earthquake hit his home city in Central Sulawesi, Indonesia. The earthquake was followed by a three metre high tsunami, which brought mass destruction in its wake.

Budy prayed with the team. They felt they had to try and make it back to the city. The long journey started with a strenuous 24 hours of walking over mountains, through deep valleys and cutting through thick forests to make it to the main road. There they were told there was one motorbike they could hire and very little fuel. They prayed again and miraculously they were offered five motorbikes and just enough fuel was found to make the treacherous ride back.

The level of destruction shocked them. Buildings decimated, roads destroyed and ongoing tremors forcing people out of buildings and into the fields. No-one was untouched by the tragedy. For Budy, it was a great relief to know his wife and two children were safe.

An immediate evacuation of the city was ordered for women and children and the next morning a very full Hercules army plane departed for Makassa with Budy’s wife and children on board. Again they were separated with uncertainty all around them. An American friend offered Budy his car so he could drive to another airport to the north. ‘It doesn’t have much fuel left’, he warned.

Their journey would be 600 kilometres but they only had enough fuel to make it 200 kilometres. Budy prayed: ‘Give us your fuel, Lord!’ This was a very appropriate prayer, as the men were worn out and exhausted from their experiences. Every time they were about to run out of fuel, they came across a roadside stall selling just the amount of fuel they needed to make it to the next town. The remaining fuel was just enough to get them to the airport so Budy could fly to Makassa to be reunited with his family!

After such a harrowing experience, Budy was uncertain about returning to the area. Yet, after a few weeks had passed, he was confronted with the memory of something the people in the village had said to him: ‘Why would you leave us alone? You are our leader. You have come here to share your holy book with us. You must be together with us’. It was clear what he had to do. Once the earthquakes had settled, the family returned to continue the translation projects.

Budy wants to encourage you that, even when a situation looks bleak, you can trust that God will guide you through the storm:

When you follow Jesus, you must obey him. You cannot trust your own plans but you must trust in him. If he calls you, he will take care of you. It is not always easy but he will protect you. Always trust him.

A reminder that God saved me for this purpose 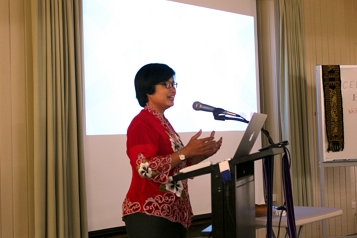 The first response for many people with a life-threatening injury is not to praise God. But Netty says it was the beginning of God leading her to the place he wanted her: serving him as a translation facilitator with Kartidaya.

When Netty was 11 years old, she was hit by a truck while riding to school. She was rushed to hospital but her parents were told to prepare for the worst. The prognosis did not look good. Netty sustained severe head injuries. Doctors explained to her parents that she would most likely die or have severe mental problems if she survived, and told them to pray. She spent several weeks in Intensive Care and endured two major operations. Netty’s parents prayed that God would protect their daughter and use her for his glory. To their surprise, she awoke from her first operation and announced, ‘I want to be a pastor!’

While she was recovering, Netty had a lot of time to read. One of the books that her father bought her made a particular impression. It was a compilation of stories about a missionary working in Papua, Indonesia. Some years later she read about a group of Bible translators working with different language communities throughout Indonesia. Netty says that sparked questions in her mind. One of these was:

Don’t we already have the Bible in Bahasa Indonesian? Isn’t that enough? I was reminded of the story in Acts 2 about the Holy Spirit falling on the Apostles, allowing them to speak in other languages. It was then that I realised how important it is to hear God speak to us in a language we understand. That is why we need to translate God’s Word—how will others know about Jesus if they cannot understand the words that describe him?

Looking back Netty realised how much her life had been impacted by that accident. ‘It was a scary time but God saved my life and it gave me purpose. So I said I would give my life to him. I prayed to God in my heart, “Please send me!”’

After graduating from Bible College in 2006, God answered Netty’s prayer by putting her in contact with Kartidaya. She attended orientation and completed some linguistics training before travelling to Central Kalimantan to do literacy work. In 2010 she was asked to  facilitate a translation program. Netty is amazed that God used a painful situation in her life to initially call her into the work she loves and to draw her deeper into his Word:

God healed me but my right eye is still impaired. When I feel sad about that I am reminded of Psalm 8. I am no more than dust but God still chooses to use me! God chose to save me that day. He still uses my eye as a reminder of his love for me and his power in my life. He kept his call in my heart and led me to do his will. I know this journey is not about me—it is about him. When the New Testament is finished I believe God will rejoice with us.