Kathy says she has always been interested in other languages. Studying Aboriginal Studies at university also opened Kathy’s eyes to the ongoing disadvantages experienced by Australian Indigenous communities:

When I heard that there were Australians who don’t have the Bible in a language they could easily understand, I found myself wondering whether it was something I could be involved in. I heard that there are still lots of Aboriginal languages being spoken and only one language has the whole Bible available (Kriol).

The PEV Mini-Bible (about 70% of the New Testament and a few excerpts from the Old Testament) is due to be published soon but Kathy says that there is still a ‘lifetime of work’ to get other books translated and audio recordings made to help with Scripture engagement:

It’s exciting to know that the PEV Mini-Bible has been sent to the publisher after many years of hard work that Dave Glasgow and others have put into it. It’s also encouraging when we get requests for more books to be translated because we know that people are using it and finding it helpful. But it does remind me how much there is to go!

With a few years of experience now under her belt working on the PEV, what is Kathy looking forward to in the future?

I’d love to see the whole Bible available in the PEV one day, so I plan to continue  working on the PEV as my main project. I’m also encouraged by the many Aboriginal people who want to translate the Scriptures into their own languages. I want to support them in that work. We recently had a week-long workshop where 11 Aboriginal people came to Darwin and translated Luke 2:6-12 into six languages. For most of them, it will be the first Scripture ever published in their language. It’s such a privilege to be a part of that!

Working alongside local translators has also shown Kathy how hard it can be to clearly communicate the importance of the gospel message:

God’s Word has the power to transform lives, so we really want to make sure that a Bible translation is communicating clearly, but that’s not without its challenges. At a recent translation workshop, I found out that some languages don’t have words for things like ‘save’, ‘animal’, ‘box’ or ‘world’.

Even native English speakers have found the PEV helpful for understanding Bible passages in a new light. A particular passage which has stood out to Kathy from the PEV is John 6:68:

Your words will make us live with God forever. Nobody else has a message like that.
John 6:68b (PEV)

Indeed, no one else has a message like the one we read in God’s Word. Translations like the PEV enable language communities to understand the unique message of God’s love, grace and forgiveness.

For more information, go to https://wycliffe.org.au/member/kathy/

How the Plain English Version is opening doors for the gospel

Continue to remember those in prison as if you were together with them in prison, and those who are mistreated as if you yourselves were suffering. – Hebrews 13:3 (NIV)

The Prisoner’s Journey (TPJ) is an eight-week program run by Prison Fellowship Australia. It is based on the Christianity Explored series, using Mark’s Gospel as a way for helping inmates connect with the person of Jesus when he is presented as someone who was also rejected and despised.

When Prison Fellowship CEO Glen Fairweather met with chaplains at the Darwin Correctional Centre, one of the key messages that came through was that there needed to be a program that Indigenous inmates could connect with. He shares:

We felt an increasing conviction to do more for Aboriginal people who are incarcerated. We wondered how to tailor the TPJ program to the needs of Aboriginal men and women. Then we began reaching out to networks and trying to figure out how on earth we could make this happen. My first phone calls were to Wycliffe and SIL Australia.

Glen discovered the Plain English Version (PEV) translation that retired Wycliffe and AuSIL member David Glasgow helped to create for the Gospel of Mark. He approached Dave to see if it could be used in the TPJ program.

Dave was happy for Prison Fellowship to use the PEV translation but he went above and beyond our expectations, even getting the questions in the course translated into a similar style as the translation itself to keep everything consistent.

Dave says he is similarly thrilled that his work with the PEV translation is being used in such a significant way in prisons:

The PEV allows Indigenous people to read God’s Word in a format they can understand. We edited The Prisoner’s Journey course book using the same principles as those used in the PEV, for example, replacing passive constructions with active verbs. Grammar constructions that are not used in Aboriginal languages but are common in English can be confusing to those for whom English is a second language. These changes ensure that the message of the Gospels is clear to an Aboriginal audience. We would value prayer that when the PEV is available many Indigenous people will hear about it, find out how to get hold of it, accept it as God’s Word to them, and live by it.

Another important aspect of the PEV of TPJ is the visual element of the teaching. The study guide and the Gospel of Mark have been completely overhauled and adapted to suit Aboriginal participants. AuSIL Director Alan Rogers put Glenn in touch with graphic designer Paul Davies. Paul grew up in an Indigenous community in Tennant Creek so he had connections with local Indigenous artists. 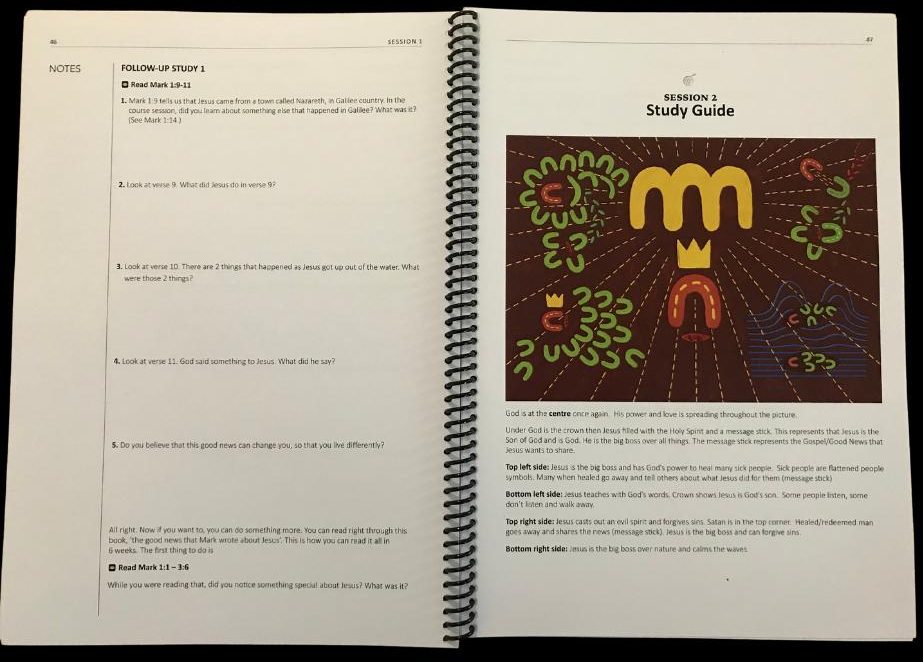 Each session has accompanying artwork which helps any participants who are non-literate reflect on it in their own time. Facilitators can also show images in large format so that inmates who aren’t literate can still participate in the sessions.

The project has come together in record timing and Glen is grateful for the partnership of many organisations working together towards the one goal:

We’re not the Bible translators, we’re not the graphic artists but we have a vision to reach this people group and to reach Aboriginal inmates. To have so many other individuals and organisations from Prison Fellowship, Wycliffe Australia, SIL Australia, AuSIL, The Bible League and Christianity Explored all willing to support that vision is the biggest blessing.

Richard adds: ‘Yes, this has happened so quickly! We just think that God’s had his hand on this. Together, we’re unlocking hope.’

The pilot program for the PEV of TPJ is waiting to be rolled out at the Darwin Correctional Centre and Richard is hoping that facilitator training can start and the new booklets can be used once COVID-19 restrictions are eased.

To discover more about the PEV of the Bible, head to https://aboriginalbibles.org.au/english-plain/

Why do we need ANOTHER version of the English Bible?

This is the question Dave Glasgow and his team often encounter as they work on the Plain English Version of the Bible. Dave explains:

The PEV allows Indigenous communities to read God’s Word in a format they can understand. Australian Indigenous languages have no passive voice and very few abstract nouns. They are also some of the most linguistically diverse languages in the world — especially compared to English. People may speak English as a learned language but they still think in terms of their mother tongue. There may be some features they share in common with the learned language, but those that differ can cause significant misunderstandings. We are modifying the English contained in the Scriptures to conform to their Indigenous thought, culture, grammar and semantic patterns.

The PEV is a great tool for Scripture engagement and comprehension in simple English. It is also incredibly strategic in bolstering and expediting the work of individual Indigenous translation projects. Dave says:

When I first joined AuSIL to work with the Burarra language, and later when I was a translation consultant, I learned about the structure of Indigenous languages, which helped when I came to start work on the PEV. Now I know of at least three translation projects using the PEV as the main tool to help with their own translation. It gives them a helpful starting point.

Several books have been published in printed form by the Bible League. A PEV mini-Bible with most of the New Testament and portions from Genesis and 1 & 2 Samuel will be printed in 2020. In the meantime, the team are compiling illustrations to help explain the stories.

For more information on the Plain English Bible, go to https://aboriginalbibles.org.au/english-plain/.