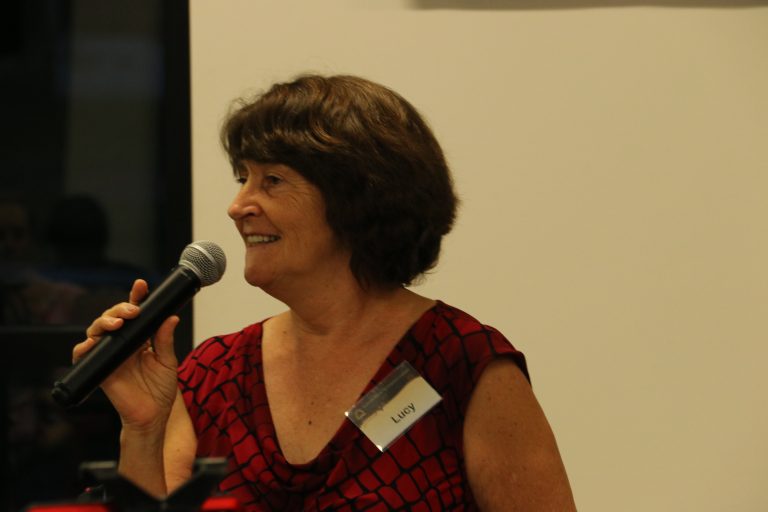 Alan and Lucy Rogers are Wycliffe members and have been serving with AuSIL in Northern Australia since 1986. They initially helped with translation among the Garrwa people then moved into audio and media Scripture engagement across many language groups. For the last three years, Alan has been the interim Director of Australian Society for Indigenous Languages (AuSIL) but passed on his responsibilities to Phillip Townsend this year.

Lucy has years of experience in ‘ethnoarts’: ethnic arts that are empowering local language communities to create visual art, music, dance and drama representations of Scripture in a culturally-relevant way.

Lucy says that there are positive signs of ethnoarts being recognised as a valuable way of engaging in local culture:

There has been a growing interest in ethnoarts in both the secular and Christian worlds. We have found that when Indigenous Australians engage in local art forms within their communities, it speaks to others in their language group who might not otherwise have been interested in hearing about God. Among Indigenous Australians, there is a huge swing towards the use of arts. This has a huge effect on the maintenance of language and culture, allowing for freedom in expression but also for passing on information in a way that is culturally relevant.

This has had a detrimental effect on how many Indigenous Christians perceive their culture. Just because a person becomes a Christian, it doesn’t mean they have to give up eating with a knife and fork or setting the table a certain way. In the same way, not all Indigenous culture should be discarded.

Ethnoarts enable language groups to discover aspects of their culture they can bring to God and use for his glory. As Lucy explains:

We need to encourage Indigenous churches to engage in dialogue as they seek direction from God about what is permissible within their culture. Language groups such as the Warlpiri have adapted their iconographs to tell Bible stories. In Arnhem Land, there is a group of ladies exploring ways of using some of their dance forms for God—they feel this is from God but are waiting on their elders to approve this use. Yet other language groups have not done this and may frown upon it.

Unfortunately, language usage has changed a great deal since Alan and Lucy first moved to the north of Australia. Many young people no longer speak the language of their parents and grandparents. However, Lucy says that the production of audio Scripture and music in Garrwa and other Indigenous languages is helping to revive language, particularly in church settings. Lucy says that the songwriters workshops she facilitates are always a highlight:

We have been involved in many songwriting workshops since 1987. Some are held in our AuSIL centre, others in the community. It is lovely to encourage folk to seek God by writing songs, to base their songs on God’s Word and to see people working together to worship God in their preferred musical style. It is a real joy and privilege to be involved in the whole process, from recording many of the completed songs, to later hearing these songs shared across communities.

Now that she and Alan have more time to spend in community, Lucy plans to sit with people and learn more about their arts and the spiritual undertones:

I want to encourage and pray for believers as they seek God’s direction for their arts. I also want to document the development of Christian Indigenous dance and variations within language groups.

Looking back on the past 35 years, Lucy says she loves the space, freedom and remoteness of being in community:

The motto here is ‘go with the flow’. You cannot rush anything. Relationships are more important than time-oriented goals. It took time to develop but it is very special to be part of our Garrwa family and clan system and really feel like we belong.

Please pray for Lucy and Alan as they:

Alan Rogers is a storyteller. As the Director of the Australia Timor Group (formerly the Australian Society for Indigenous Languages or AuSIL), he connects with a range of different language groups in the Northern Territory and throughout the Top End. Aside from meeting with translation teams, providing guidance and support, Alan has a passion for seeing Indigenous people connect with Jesus’ story through God’s Word. As many First Nations people are from cultures that pass on stories orally, Alan and his wife Lucy have been helping them to record Scripture and worship songs in their own languages. Over 650 albums have been created so far. Some of the albums Alan has recorded have some incredible stories behind them.

Something that Alan and his team are passionate about is encouraging the use of Indigenous language in churches to help raise a new generation of gospel workers. There are 21 different translation programs in progress throughout Australia with ATG. Alan says that the best way to move forward with these projects is to train Indigenous translators in biblical studies:

We need to have more Aboriginal people trained in how to look for parallels in a Bible passage to help make explicit that which is implied—otherwise, the people are just listening to a story. Nungalinya College currently has 15 Indigenous students studying the new Diploma in Translation this year. I think this course will be instrumental in training Bible translators who can connect with Scripture on a level that non-Indigenous people would not be able to.

Greg Anderson, Anglican Bishop of the Northern Territory, agrees that ‘the best clergy we can have here are people who used to be Bible translators’. The full revised Kriol Bible (2019) involved Indigenous people with a heart for keeping their language, culture and faith alive for future generations. Alan shares, ‘If we can inspire a new generation of translators, we can achieve similar results in other languages.’